The rush to support corn ethanol via the ethanol mandate from Congress and the Bush Administration was so enthusiastic that even the experts were caught off guard by the rise of farm prices this year. According to Keith Collins,

“We did not anticipate these soaring prices. Long run projections from the Congressional Budget Office, USDA, and the International Food Policy Research Institute (a major economic think tank), none of them (predicted) prices like we’re seeing now in the cash and futures markets. No one forecasted $5.50 to $6.30 per bushel corn prices. We were in the $3.70 per bushel range.”

There was one group, however, that was warning of dire consequences when Congress was deliberating expanding the 2007 RFS mandate five-fold over the 2005 mandate. Livestock producers warned Congress that since they rely on over 50 percent of the US corn crop to feed their animals, a huge corn ethanol mandate would hurt them. In response, Congress easily defeated an amendment they supported that would have waived the mandate if the U.S. Stocks to Use Ratio (S/U) for corn dropped below 10 percent. The Stocks to Use Ratio (simply the measurement of the remaining carryover as a percentage of consumption) helps determine the price of corn. The livestock producers and agricultural economists know from experience, that when the S/U falls below 10 percent, the price of the stock will rise sharply. In the case of corn, it will become difficult for producers to keep buying corn for meat production. In 2007, the U.S. corn S/U ratio dropped to 9.5 percent, the lowest it’s been in five years.33 (See the stocks to use ratio chart) 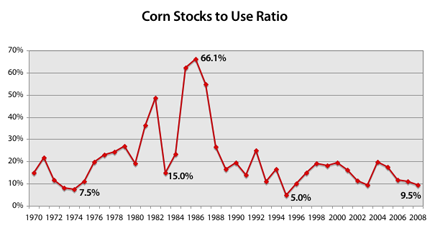 Senator Thune speaking at the American Coalition for Ethanol conference in August 2007 bragged about the successful defeat of a waiver to the RFS if corn S/U fell below 10 percent:

“The second amendment was an automatic waiver of the Renewable Fuels Standard if the corn stocks-to-use ratio fell below 10 percent. This ratio is a false indicator of corn demand and expected price. Weather conditions, export demand, feed production, and other market forces all play a role in determining the corn-stocks-to-use ratio. Such a waiver would suffocate investment in new ethanol plants, as investors would be forced to predict future corn-stocks-to-use ratios. Fortunately, the majority of U.S. Senators saw these amendments as misguided attempts to derail domestic biofuel production, and these amendments were soundly defeated on the Senate floor… the corn-stocks-to-use amendment was defeated 63 to 31. However, these amendments are an important reminder that Congress cannot rest on our laurels following the 2005 RFS and must continue to work hard on behalf of the American farmer, our ethanol producers, and consumers across the country who are tired of being held hostage by high gas prices and foreign oil dependency.”

When asked on the press call how things might improve in the future, Collins said,

“We could achieve conversion to cellulosic ethanol and corn yields could improve. But we’ve got the foot on the accelerator in our current ethanol situation and there’s little prospect to back off that. Nine billion gallons (of corn ethanol) are required (by the Renewable Fuels Standard mandate) in 2008 and 15 billion gallons are required in 2015 so there will be substantial increases in the demand for corn, and thus (there will be) pressure on prices and low stocks for the next few years.”

If Congress were to remove the RFS, Collins notes that, “At least three studies have estimated that corn prices could fall by over 20 cents per bushel in the near term to up to 60 cents per bushel after several years.” One such study was conducted by agricultural economist Bruce Babcock and Lihong Lu McPhail from Iowa State University.34 They estimated last March what would happen to corn prices if a major weather disturbance were to reduce the crop this year. Simulating the effect of a 1988-style drought (roughly a 28 percent shortfall from expectations) in 2008, the economists estimate corn prices could rise to $7.99 per bushel if the RFS remained binding. If the RFS mandate was lifted, prices may rise to $6.59 per bushel. With such high corn prices, the authors predict ethanol producers’ operating margins will be squeezed, plants will not be able to break even let alone earn a profit, and therefore, they will shut down. The authors say the RFS mandate could be enforced if the government:

The method currently in place in the RFS would put the burden on ethanol blenders, but taxpayers could be forced to pick up the tab through increased or new tax credits or other efforts to keep ethanol plants open. U.S policy to promote the production of food crop-based biofuels is both short-sighted and dangerous. High corn prices will limit the contribution corn-based ethanol can make to our energy supplies, unless taxpayers are asked for more and more subsidies and credits to support the industry. The more corn diverted into fuel production in hopes of solving our energy problems, the greater the risk imposed on hungry people. The whole world, from average Americans to the poorest billion people on the planet, cannot rely on America’s food-to-fuel gamble. We need to step back from our current policies and chart a new course to a more sustainable biofuels policy.

‹ What Will The Weather Bring This Summer? References ›