The boom in natural gas and oil exploration using hydraulic fracturing and horizontal drilling, commonly called fracking, has created a huge demand for the sand that drilling companies mix with water and toxic chemicals and inject underground to free gas and oil trapped in deep rock formations.

A 33-county area that spans southeastern and south-central Minnesota, southwestern Wisconsin and northeastern Iowa has become a major source for this now-valuable sand. As of March 2014, according to data compiled and mapped by the Environmental Working Group (EWG), the tri-state area was home to 71 operating silica sand mines and 27 sites for solely processing, transporting or loading sand onto trucks or rail cars. Another 82 mines or associated sites have been proposed or granted permits.

Across the region, EWG’s mapping shows that more than 58,000 people live within 750 meters (less than half a mile) of the existing permitted or proposed sand mines and related sites, which can release fine particles of silica into the air. Research has shown that these particles can degrade air quality as far as 750 meters away, leading to a variety of serious health problems, particularly in children and other vulnerable populations. More than 162,000 people make their homes within 1,500 meters of the frac sand-related sites in the region. In the absence of definitive evidence on the potential risk from airborne silica at 1,500 meters, EWG recommends that air monitoring be conducted to determine whether there is a danger to public health at that distance as well. (See Silica in Outdoor Air – The Danger of Frac Sand.) 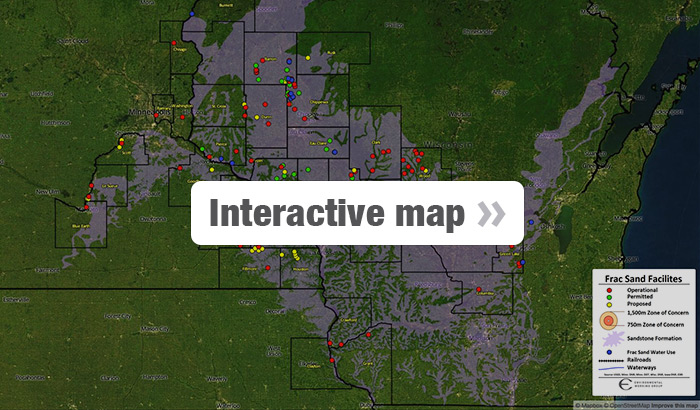 The expansion of the frac sand industry in the region has been explosive. In 2004, there were only 20 mines and 20 mine-related facilities in operation, meaning that in the last decade the number of mines has increased by 145 percent. Some news reports have cited higher figures, and the rapid growth and patchy regulation of the industry make it likely that some sites have been overlooked. EWG used figures supplied by state, county and local agencies and jurisdictions.1

With the exception of Ramsey County, which includes St. Paul, Minn., most of the counties where frac sand facilities are located are rural or small-town areas. But the spread of the industry throughout the region means that tens of thousands of people now live or work near sand mines or their associated sites.

Using U.S. Census data and computer mapping, EWG calculated the number of people in each county who live within 750 meters and 1,500 meters of a frac sand site. (Table 2) The first zone, at 750 meters, is the distance downwind from a sand and gravel pit at which air monitoring studies have found that the level of airborne silica particles can be twice as high as it is upwind. The second zone, at 1,500 meters, is the distance from the sites at which EWG recommends that regulators monitor air quality. There is not enough evidence to know whether people living in the 750-to-1,500 meter zones are at risk, but the lack of certainty underscores the need for monitoring, health studies and adoption of enforceable standards.