Milk from cows raised in some parts of California may expose infants and children to more of a toxic rocket fuel chemical than is considered safe by the U.S. Environmental Protection Agency (EPA) and the State of Massachusetts, according to unreleased tests by state agriculture officials and independent laboratory tests commissioned by Environmental Working Group (EWG).

In the first study to look for perchlorate in California supermarket milk, EWG found perchlorate in almost every sample tested - 31 out of 32 samples purchased from grocery stores in Los Angeles and Orange counties. Through a state Public Records Act request, EWG also obtained results of tests for perchlorate in milk by the California Department of Food and Agriculture (CDFA), which the agency has not made public or provided to state health officials. CDFA's tests found perchlorate in all 32 samples of milk collected from unspecified sources in Alameda, Sacramento, and San Joaquin counties — but the agency kept this information quiet even as health officials were deciding how much perchlorate is safe for Californians to consume.

EWG's computer-assisted analysis of federal dietary data shows that by drinking milk contaminated with the levels ‡1 of perchlorate found in the two studies, 7 percent of women of childbearing age would get a daily dose of rocket fuel larger than the level currently considered safe by the EPA. But children are by far more at risk: Half of all children 1 to 5 would exceed EPA's provisional daily safe dose just by drinking milk, and more than a third would get twice that dose. One-third of children 6 to 11 would get a larger dose than EPA says is safe, with one-fifth consuming twice as much. These risk estimates assume zero perchlorate exposure from other sources, such as contaminated tap water and foods. 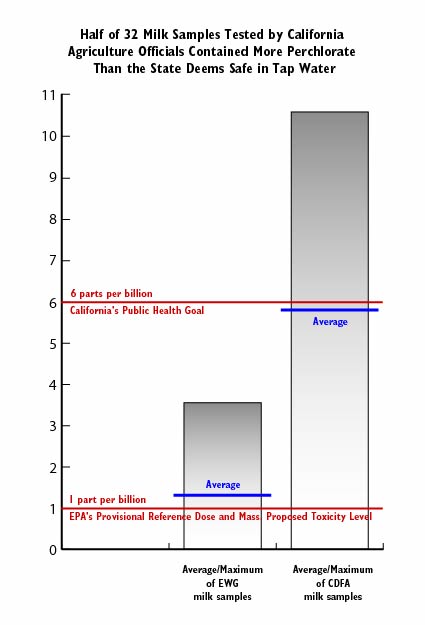 Perchlorate, the explosive component of solid rocket and missile fuel, can affect the thyroid gland's ability to make essential hormones. For fetuses, infants and children, disruptions in thyroid hormone levels can cause lowered IQ, mental retardation, loss of hearing and speech, and motor skill deficits. Currently there are no enforceable perchlorate safety standards at the state or federal level, but based on research showing health effects in laboratory animals at very low levels, EWG believes a national safety standard should be no higher than one-tenth the EPA's current safe dose.

In March, California health officials adopted a public health goal for perchlorate of 6 parts per billion (ppb) in a liter of drinking water. (A public health goal is the level used to set an enforceable state drinking water standard, expected later this year.) But the EPA's most recent provisional daily safe dose (RfD, for reference dose) is 1 ppb - the same level as a final risk assessment released last month by Massachusetts state scientists. Using the California health goal as a benchmark, only about 1 percent of children under 12 would get an unsafe dose of perchlorate by drinking milk. But both the EPA and Massachusetts have criticized the California goal as too weak, in light of the available data on health effects at very low levels.

The average perchlorate level in milk tested by the state, 5.8 ppb, is essentially the same as the maximum safe level of the just-adopted public health goal. The average level found in the EWG tests was lower, at 1.3 ppb, but could still present health risks, particularly for small children, who drink large amounts of milk relative to their size.

What's more, EWG's dietary risk analysis does not include additional perchlorate exposure through drinking water or foods other than milk. Our findings are not a call for California mothers to stop drinking milk or stop giving it to their children. But they do show that the public health goal is inadequate, and the state must set a tougher final drinking water standard that fully protects public health. Mothers should not be forced to wonder if milk — for many people the very symbol of a healthy diet — is affecting their child's growth and development.