August 8 2007. Laboratory tests of canned infant formula conducted by the Food and Drug Administration (FDA) and a certified commercial laboratory reveal that a plastics chemical called bisphenol A (BPA) leaches from metal can linings into formula. According to a new EWG analyses, the amount of BPA ingested by some bottle-fed infants exceeds the doses that caused serious adverse effects in animal studies.


These analyses, coupled with exposure estimates in other studies, demonstrate that bottle-fed infants likely face higher BPA exposures than any other segment of the population, and highlight the urgency of setting standards for this chemical to protect babies who are overexposed through canned liquid formula.

Figure 1. BPA has been found in infant formula at levels ranging up to 17 parts per billion, a concentration at which nearly two-thirds of infants would exceed doses shown to harm test animals. 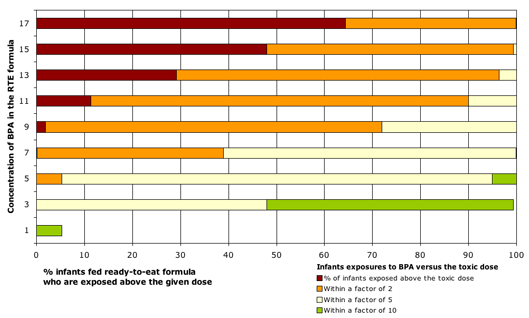 Source: EWG analysis of BPA exposures based on government and commercial lab tests of BPA in formula, and formula consumption rates and body weights measured in government surveys. This graph reflects procedures described in the methodology section of this report, with the exception that exposure estimates for individual infants created in the exposure model were based on incremental, assumed BPA concentrations in formula, and grouped as a function of BPA concentration for purposes of graphical display. Estimated single-day exposures are compared against BPA dose of 2.4 ug/kg body weight / day linked in lab studies to alterations in testosterone levels and referenced as "toxic dose" in figure above (see Section 3 of this report). Note that results shown above will underpredict infants exposed above even lower doses found harmful in animal studies, including a dose of 2.0 ug/kg/day linked to permanent damage of reproductive system from in-utero exposures.


Failures to protect infants from BPA risks. FDA last assessed the safety of BPA in infant formula in 1996, based on tests of 14 infant formula samples (Bailey 1996). Dozens of peer reviewed studies published since that time reveal adverse effects of BPA at exposures dramatically lower than those known at the time to be harmful, and, significantly lower than exposures for infants drinking BPA-contaminated formula.

Yet despite scientists' dramatically altered understanding of low-dose BPA toxicity, FDA has not tested additional samples of infant formula for BPA, and has failed to reassess the safety of BPA-contaminated infant formula since its original assessment 11 years ago. FDA does not require infant formula manufacturers to test their products for BPA.

Instead, in 2006 the federal government launched a BPA health risk assessment under the National Institutes of Health's (NIH's) Center for the Evaluation of Risks to Human Reproduction (CERHR). From the outset the assessment process has been plagued by concerns over scientific credibility and conflicts of interest:

What could have been the first opportunity in a decade to advance public health protections for this problematic chemical instead ended in CERHR issuing a final assessment on August 8, 2007 that fails to support stronger public health safeguards for bottle-fed infants, pregnant women, and other at-risk populations.

BPA has been detected in thousands of people worldwide, including 93 percent of 2,500 people in the United States. More than 100 peer-reviewed studies have found BPA to be toxic at low doses, some similar to those found in people, yet not a single public health agency has updated safety standards to reflect this low-dose toxicity.

This country's toxics law, the Toxic Substances Control Act, fails to require that chemical companies prove thier products are safe before they are sold, even when these chemicals end up in people's bodies, as is the case for BPA. This law was passed in 1976, and 31 years later is the only major public health and environmental statute in this country that has never been updated. This panel certainly has not done their part to help fill the gaps in this broken system of public health protections.

As a result of these policy gaps, BPA is now one of the most widely used industrial chemicals, is found at unsafe levels in people, is allowed in unlimited quantities in a broad range of consumer products including infant formula, and is entirely without safety standards. BPA provides irrefutable proof that our system of public health protections must be strengthened to protect children and others most vulnerable to chemical harm.

Lab tests of canned food — BPA contamination in more than half of 97 name-brand canned foods: https://www.ewg.org/research/timeline-bpa-invention-phase-out

Consumer Products
BPA in infants and others ›